Written by Carol Beuchat (PhD), this article discusses canine hip dysplasia, one of the hot topics in dogdom.

Hips are a hot topic in dogs, if it's possible to stay "hot" for 50 years. Researchers have been working hard for decades looking for solutions, and breeders have been doing their best to reduce the risk of producing affected puppies. But still the problem remains.

There are some simple things we could do to reduce the incidence of hip dysplasia now if we understand a few basic things. Here are the 10 most important things you need to know.

1) All puppies are born with perfect hips 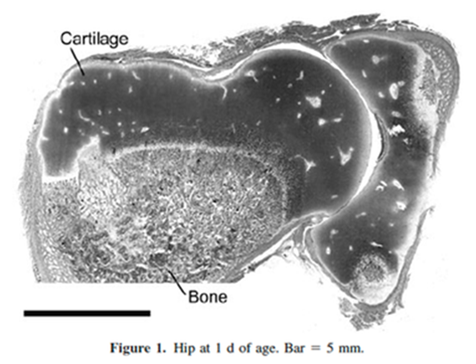 Hip dysplasia is not a congenital defect; it is not present at birth. Multiple of studies have demonstrated that all normal puppies are born with "perfect" hips. The structures of the hip joint are cartilage at birth and only become bone as the puppy grows. If a puppy is going to develop hip dysplasia, the process begins shortly after birth....

This is the hip joint of a 1 day old puppy. The cartilage tissue does not show up on an x-ray until the minerals are deposited that form bone. Proper development of the joint depends on maintaining the proper fit between the head of the femur and the socket (acetabulum).

"The hip joints of all dogs are normal at birth. The joints continue to develop normally as long as full congruity is maintained between the acetabulum and the femoral head... The acetabular rims are stimulated to grow by mild traction applied by the joint capsule and gluteal muscles attached along their dorsal borders, and from pressure by the femoral heads upon the articular surfaces... The morphologic characteristics of the complex hip structure show that biomechanical behavior is the prime influence in the growth of this joint." (Riser 1985)

2) The genes that cause hip dysplasia have not been found

Hip dysplasia tends to be more common in some breeds than others and in some lines than others, which suggests that there is a genetic component to the disorder. However, scientists have been looking for genes that are responsible for the development of hip dysplasia in dogs for decades without success

Genes that are associated with hip dysplasia have been identified in some breeds, but they are breed-specific; that is, the assortment of genes is different in every breed. (For example, see studies on the German Shepherd dog (Marschall & Distl 2007, Fells & Distl 2014, and Fels et al 2014), Bernese Mountain Dog (Pfahler & Distl 2012), and Labrador Retriever (Phavaphutanon et al 2008.) Genes that could cause hip dysplasia have not been found in any breed.

3) Environment is more important than genetics

Although there is a genetic influence on hip dysplasia, the heritability of the trait is rather low. Many studies have shown that genetics only accounts for a relatively small part of the variation in hip scores, usually 15-40%. This means that 60-85% of the variation in the quality of the hips is the result of non-genetic, or "environmental" influences. This is one reason why decades of strong selection has resulted in only modest reductions in hip dysplasia in some breeds. At the current rate of progress, it could take decades to achieve a meaningful reduction in the incidence of hip dysplasia (Lewis et al 2013).

Understanding the specific environmental factors that play a role in the development of hip dysplasia should allow us to reduce hip dysplasia even if the genetic basis is not yet understood. This would reduce the significant pain and suffering caused by hip dysplasia, as well as the expense and heartache endured by owners of an afflicted animal. There is no reason why we should not be taking active steps to do this now.

The top three environmental factors that have been found to play a significant role in the develop of dysplastic hips are:

4) Joint laxity is the primary cause of hip dysplasia

Puppies are born with perfect hips, and if the hips do not develop laxity the dog does not develop hip dysplasia (Riser 1985). Joint laxity occurs when the head of the femur does not fit snugly into the acetabulum. This could be the result of traumatic injury, overloading of the joint by weight, lack of muscle strength, or adductor forces (e.g., when the legs are together). Joint laxity is the primary factor that predisposes a dog to the development of hip dysplasia.

In dogs as well as many other vertebrates (including humans), the head of the femur is held securely in place by a strong ligament variously called the "round ligament" or "teres ligament".

One end of this ligament is attached to the head of the femur and the other end to the inner wall of the acetabulum (the cup-like socket on the pelvis).

You can see the teres ligament in this illustration (labeled "LIGAM. TERES"). 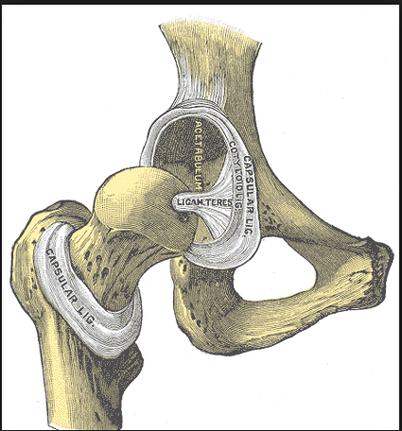 If this ligament is damaged or severed, the femur will not be held tightly in the socket, which will cause the joint to feel "loose". 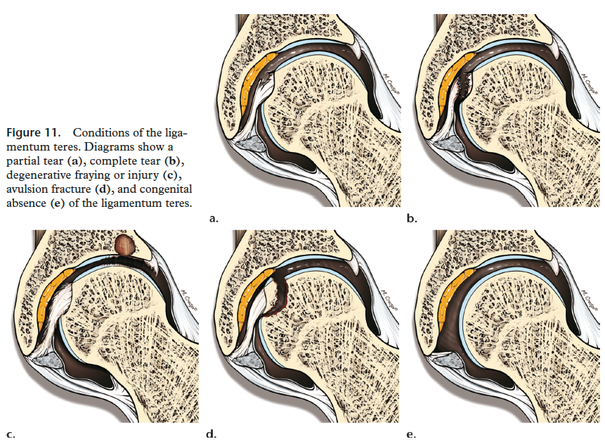 If the femoral head is not positioned properly in the socket, the forces on the hip will be abnormal. Instead of forces being distributed across the inner surface of the socket, they will be concentrated in a smaller area on the weaker rim of the acetabulum. The result will be damage to the rim of the socket when a load is placed on the hip joint. 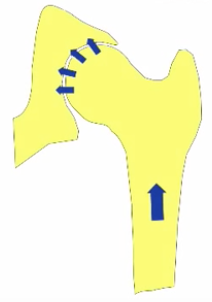 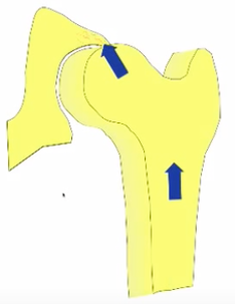 The teres ligament should hold the head of the femur securely in the socket of the growing puppy while the muscles that will support the hip develop and grow stronger. But in some puppies, the ligament shows evidence of damage before they are even a month old. (Riser 1985)

"The teres ligaments of the hip joints were edematous [swollen], a few ligament fibers were torn, and capillary hemorrhage dotted the surface of the ligaments at the point of the tears. These changes were considered the first findings that might be linked to hip dysplasia."

The inappropriate forces on the femur and acetabulum that are caused by joint laxity result in the trauma that causes hip dysplasia and osteoarthritis of the hip.

"There is no evidence that a primary defect of bone exists but rather the disease is a failure of the muscles and other soft tissues to hold the hip joint in full congruity. This is further supported by the fact that bony dysplasia can be increased, decreased, or prevented by controlling the degree of joint instability and incongruity. No other malformations are associated with the disease. A causal relationship between muscles and soft tissue defects or pathologic changes other than lack of muscle mass or strength has not been established... Hip dysplasia is a concentration of factors from a pool of genetic weaknesses and environmental stresses that fall into a programmed pattern of progressive remodeling and degenerative joint disease." (Riser 1985) 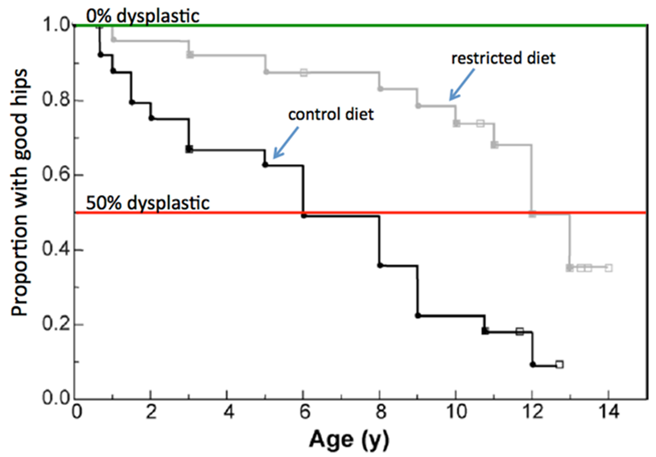 If there is laxity in the hip joint, the amount of damage done to the femur and acetabulum will depend on the magnitude of the forces in the hip joint. The heavier the dog, the greater the forces will be and also therefore the higher the risk of hip dysplasia and osteoarthritis.

Puppies that weigh more at birth as well as those with higher growth rates (so they get heavier sooner) have a higher risk of degenerative changes in the hip joint (Vanden Berg-Foels et al 2006).

Puppies kept on a restricted diet (gray line) have a dramatically lower risk of dysplasia and it develops much later in life than in puppies kept on normal rations (black line) (Smith et al 2006). And they live longer, too (Kealy et al 2002)!

Unfortunately, many dogs (including show dogs!) are overweight (McGreevy et al 2005, Corbee 2013), and obesity could well be the single most significant environmental factor affecting the development of hip dysplasia and osteoarthritis. But this is a factor that we can control.

Although progress from genetic selection will take many generations, the incidence of hip dysplasia in dogs could be immediately and dramatically reduced simply by practicing better weight management.

7) Exercise is good and bad

Exercise strengthens the muscles of the legs and pelvis that will increase the stability of the hip joint. But all exercise is not created equal.

Puppies raised on slippery surfaces or with access to stairs when they are less than 3 months old have a higher risk of hip dysplasia,while those who are allowed off-lead exercise on soft, uneven ground (such as in a park) have a lower risk (Krontveit et al 2012). Dogs born in summer have a lower risk of hip dysplasia, presumably because they have more opportunity for exercise outdoors (Ktontveit et al 2012). On the other hand, dogs from 12-24 months old that regularly chase a ball or stick thrown by the owner have an higher risk of developing dysplastic hips (Sallander et al 2006).

The most critical period for proper growth and development of the hip in dogs is from birth to 8 weeks old, so the type of exercise the puppies are exposed to is most important during this time.

While puppies are growing rapidly, it is critically important to get their nutrition right.

Growing puppies need to eat enough to support growth but they should not be fat, because any extra weight can increase the risk of developing hip dysplasia (Hedhammar et al 1975, Kasstrom 1975). An additional problem is that puppies getting too much food could also consume too much of specific nutrients. Puppies provided a good quality puppy food that is fed in the proper amount will have a nutritionally balanced diet and should not receive any supplements. Dietary supplements, especially of calcium, are not only unnecessary but could cause serious problems. There is no evidence that supplemental protein or vitamins will reduce the risk of hip dysplasia (Kealy et al 1991, Nap et al 1991, Richardson & Zentek 1998).

Most treatments for hip dysplasia are easier and more successful in younger dogs. If early symptoms are overlooked and screening is done only after 24 months or more, the window of time with the best prognosis in response to treatment will have passed (Morgan et al 2000). Signs of lameness usually first appear when the puppy is 4 to 6 months old, but after a month or two the dog will often seem better. This is because damage to the acetabular rim such as microfractures have healed, but development of dysplasia and osteoarthritis will continue. From there, the dog might not display clinical signs again for years while the pathological damage progresses.

Laxity in the joint can be determined as early as 4 months old. If detected early, intervention to mitigate additional damage can include weight loss, modifying exercise and activities, or surgery - but it must be done early before skeletal growth is complete. Breeders should educate new puppy owners about the factors that can increase the risk of developing hip dysplasia and also advise them to get a veterinary examination immediately if there is any sign of lameness.

Genetic selection should continue to produce modest progress in the reduction of hip dysplasia. But a significant and immediate improvement could be achieved by better control of non-genetic, environmental factors. Weight management, appropriate exercise, proper nutrition, and early intervention at the first sign of lameness are simple steps we can take that will dramatically reduce the pain and suffering caused by hip dysplasia. The research will surely continue, but we already have the information we need to tackle this problem.

This article has been reproduced with written permission from Carol Beuchat PhD. All rights reserved.
< Prev